Family Law Attorney Steven H. Everts has been named to the Best Lawyers in America 2017

Steve H. Everts has practiced law for over 40 years and represented and counseled thousands of clients in family law matters. He averages over 60 court appearances and dozens of contested hearings and trials each year.  He has been lead counsel in all family law trials and 12 jury trials. He has also been retained as an expert witness to testify regarding the performance of other lawyers. He has attended over 100 continuing legal education seminars and 11 parenting courses in the field of family law. He has been a presenter at many Family Law seminars, including 10 straight years at the prestigious Arizona Family Law Institute and the first Arizona Divorce Conference in October 2015. He has also written the briefs and/or handled the appeals in over 50 appellate cases.

Mr. Everts is a fellow of the American Academy of Matrimonial Lawyers, a Board-Certified Specialist in Family Law by the Arizona State Bar, and a Board Certified Advocate in Family Trial Law by the National Board of Trial Advocacy.  He is asked to serve frequently as Judge and Commissioner pro-tem for the Family Law section of the Maricopa County Superior Court where he has served for 17 years.  He has been rated AV Preeminent (highest competency/ethical standard) by Martindale-Hubbell Law Directory for many years.  Steve has been selected for inclusion in Southwest Super Lawyers every year from 2010 to present, and recently selected as one of the Best Lawyers in America (2017). He is licensed to practice in both Arizona and Utah in both Federal and State courts and the Ninth Circuit Court of Appeals in San Francisco, California.

The Best Lawyers In America released its 23rd Edition this year. Inclusion in this publication is based on an exhaustive and rigorous peer-review survey comprising more than 5.5 million confidential evaluations by top attorneys from all over the the United States.

Steven H. Everts Best Lawyers In America 2017Udall Shumway PLC is proud of Mr. Everts’ accomplishments and congratulate him on this important recognition. 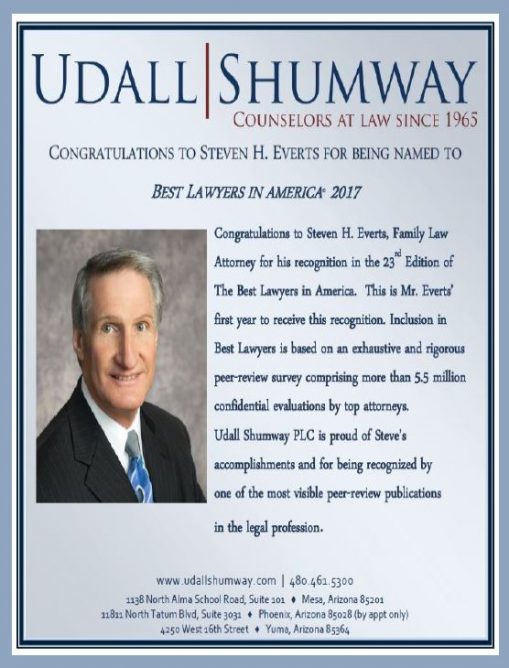